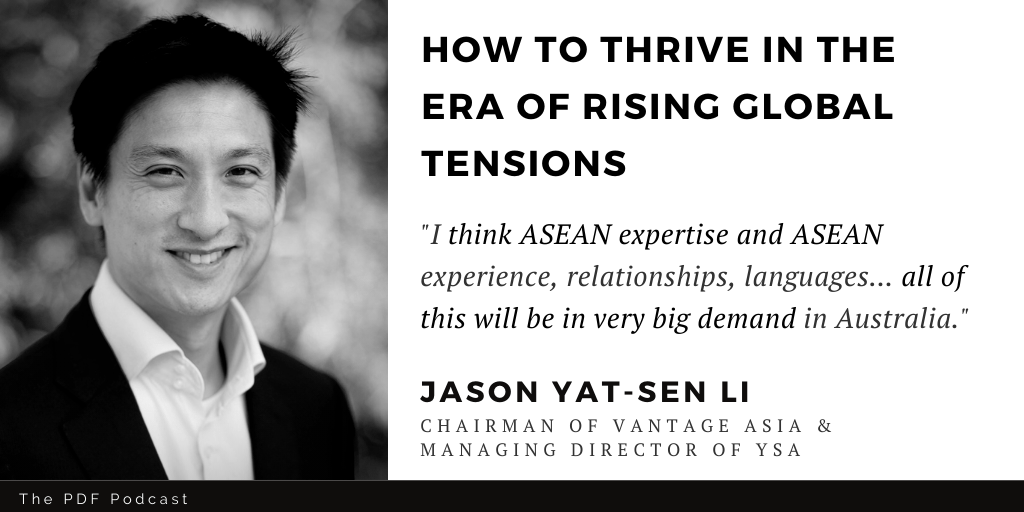 Taken from the Professional Development Forum: Jason Yat-Sen Li is no stranger to the spotlight, having recently appeared on ABC’s Q&A as a balanced voice on the Sino-Australian relations and also his time in politics as part of the Unity Party in response to Pauline Hanson’s One Nation party in the late 1990s.

We are honoured to have Jason join us at the Professional Development Forum (PDF) for a night of interactive discussion. With rising global tensions due to the pandemic and apparent anti-Asian sentiments in the media closer to home, it can be a challenge to maintain a positive outlook. In this session, Jason shares his views on the impacts and challenges that this will have on Australia and how we can make the most of these uncertain times.

Jason is a Fellow of the University of Sydney Senate, a Young Global Leader of the World Economic Forum and a member of the World Economic Forum’s Global Agenda Council on China. He was previously a non-executive director of the George Institute for Global Health, Vice Chair of the Australia-China Chamber of Commerce, a Director of the Sydney Institute and a Governing Member of the Smith Family.

Jason completed an Arts-Law degree at the University of Sydney and a Masters of Law at New York University, where he was Australia’s Hauser Global Scholar. He was formerly Head of China Strategy for Insurance Australia Group and Head of Sales & Marketing for IAG’s China operations. His work on road safety in China won the China PR Association Silver Medal for Best Campaign in 2005. Jason has also worked as a commercial lawyer for Corrs Chambers Westgarth in Sydney and Davis Polk & Wardwell in New York.

Lee Kuan Yew’s Predictions: The Man Who Saw The Future?

How to invest in Asia’s best stocks on the ASX?